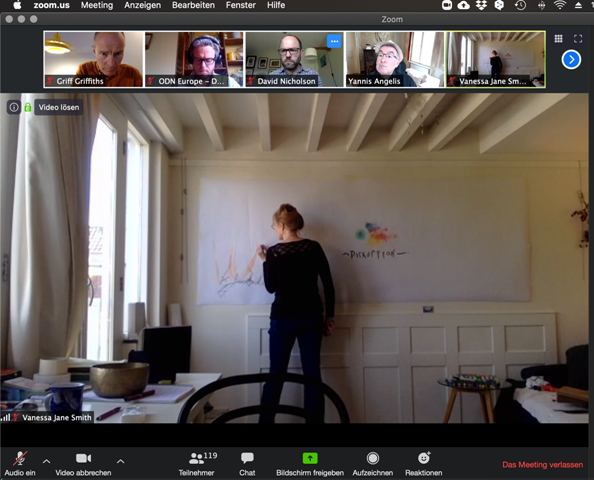 ODN Europe hosted its first ever Virtual Mini Conference on Friday 24 April.  This was to replace their planned face to face conference which was due to be held that week at the Warwick Conference Centre.
Registration opened 10 days before the conference and bookings flooded in!
The event was held on Zoom, using the Large Meeting add on.  A total of 129 delegates registered to attend.  With staff and speakers the total attendance was more than 140.   Delegates included 21 paying non members.
The main plenary featured a global practitioner, who was supposed to have opened the face to face conference.  Delegates were then invited to discuss the presentation in breakout spaces.  The group then broke into six seminar sessions, chosen in advance by all delegates.  These sessions were held on separate Zoom accounts.
All rejoined in the afternoon for the second keynote and again were invited to discuss the issues in breakout spaces.
A graphic facilitator supported the whole event – which worked really well in the virtual space.  She presented her image at the end, talking through the issues raised.
David Nicholson, Board member of ODN Europe, and Conference Team Leader said: “ In these challenging times, it’s great to be able to give people a specific place to learn, to network and to be together.  We were overwhelmed by the level of interest, engagement and the positive outcomes from the vent.  It’s just part of our wider offer to our members to support them during this crisis.”

One-day virtual conference spells new era for client after pandemic
The event attracted hundreds of delegates from across the UK and Europe to discuss and discover the latest trends, fixtures and opportunities in lotteries, fundraising and gambling.
Could your association benefit from a Twitter community?

In the past few weeks, social media networking giant Twitter have announced the impending launch…

CJAM partners with MemberWise for another year
We're delighted to be partnering with the MemberWise Network for another year, to help us continue to offer excellence in membership services to our current and future clients.
Recent Posts
Categories
© CJAM Ltd 2022, Peershaws, Berewyk Hall Court, White Colne, Essex, CO6 2QB Company No: 7242388
Back To Top

This website uses cookies to improve your experience while you navigate through the website. Out of these, the cookies that are categorized as necessary are stored on your browser as they are essential for the working of basic functionalities of the website. We also use third-party cookies that help us analyze and understand how you use this website. These cookies will be stored in your browser only with your consent. You also have the option to opt-out of these cookies. But opting out of some of these cookies may affect your browsing experience.
Necessary Always Enabled
Necessary cookies are absolutely essential for the website to function properly. This category only includes cookies that ensures basic functionalities and security features of the website. These cookies do not store any personal information.
Functional
Functional cookies help to perform certain functionalities like sharing the content of the website on social media platforms, collect feedbacks, and other third-party features.
Performance
Performance cookies are used to understand and analyze the key performance indexes of the website which helps in delivering a better user experience for the visitors.
Analytics
Analytical cookies are used to understand how visitors interact with the website. These cookies help provide information on metrics the number of visitors, bounce rate, traffic source, etc.
Advertisement
Advertisement cookies are used to provide visitors with relevant ads and marketing campaigns. These cookies track visitors across websites and collect information to provide customized ads.
Others
Other uncategorized cookies are those that are being analyzed and have not been classified into a category as yet.
SAVE & ACCEPT
Powered by

Manage Cookie Consent
We use cookies to optimise our website and our service. Only accepting Functional cookies will mean some features of the website may be unavailable.
Manage options Manage services Manage vendors Read more about these purposes
View preferences
{title} {title} {title}